We've had a week away, staying in the delightful Cornish town of Fowey (pronounced Foy). The apartment we rent is part of an old boathouse, perched right on the river, so it's excellent for watching all the comings and goings.

Every evening the local gig rowing teams were out on the river, rowing past our windows and when the weather was settled right out through the harbour entrance to the open sea 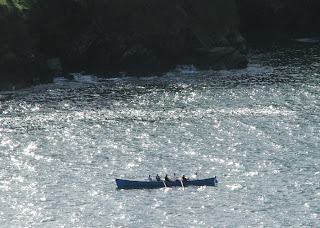 Gig racing is very popular in Cornwall, the boats are based on a Cornish Pilot Gig, rowed with six oars, they are 32 feet long and 4 feet beam. Originally a work boat, used for taking pilots out to meet incoming ships, they were designed for speed and the rough conditions of the western approaches.

In recent years there has been a resurgence of interest in rowing these boats, with new boats being built to a design based on the 1838 gig "Treffry", which is still actively rowed by the Newquay Rowing Club. Today the Cornish Pilot Gig Association has over 55 member clubs and more than 140 boats participating in events all around the west country. 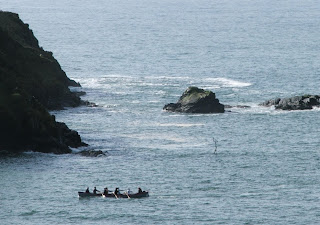 Below the Fowey ladies crew make their way up river, past Pill Creek in the early evening twilight. 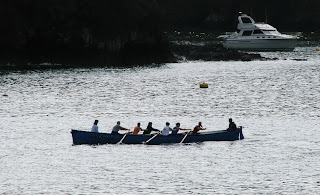