More on Yawls and Yawl Rig

Following my post about what defines a Yawl, I was delighted to hear from yacht designer Ted Brewer most especially his first hand experience sailing Bill Luders aboard Storm. 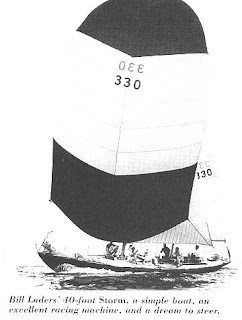 
I agree with you that the "yawl" term is misused. To my mind a yawl is a yacht with the mizzen mast stepped well aft and the mizzen itself a relatively small percentage of the over all sail area, certainly less than 15%.

Another misused term is "cutter" and today people use the term to describe any boat with a double headsail rig and a bowsprit. That could describe a Friendship sloop, of course. To them I say, go to my web site http://www.tedbrewer.com/ and look at the Blue Jeans. No bowsprit, but she is definitely a cutter because of mast location and the size of the foretriangle in relation to the mainsail.

I would like to correct some errors in your writeup about Bill Luders' Storm. She was 39 feet LOA, not 43 feet. Also, when we put the ketch rig on her we did have a mainsail. She was rated with that dinghy sized main, which we never set, but she was a legitimate ketch.

The CCA rule said that any sail tacked forward of the mast was a headsail. So we put an eye bolt about 6 inches forward of the mast and tacked a working jib from it. The luff of the jib was hoisted by the main halyard and was passed abaft the mast and the spreader, In effect, we set a good sized loose footed "main" sail but were only rated for the 60 sq ft dinghy sail. Actually that sail came off a Frostbite dinghy so was quite a bit smaller than a Laser main.

I will say for Bill that he wrote the CCA rules committee in 1960 to say that these were loopholes that needed to be corrected. They did not believe anyone would be crazy enough to do it, so Bill worked out the idea and I drew it up. The CCA rules committee came out with minimum mainsail sizes the next year. And, another time, Bill came up with a genoa jib with a roach as big as a mainsail, held out by large battens. That was also ruled out the next year.

I worked for Bill and sailed aboard Storm for 6-1/2 great years, 1960-1967, and we won more than our share of silver, no matter what rig Storm wore. She was a great boat and Bill Luders was a great man and a great boss.


I got to know Ted through his book Understanding Boat Design when I was trying to make sense of the "lead" of the sail plan on a cutter I owned a few years ago. His book is a must read for anyone who wants to make sense of how yachts actually work.

Ted is also a contributor to US magazine Good Old Boat providing the sort of designer's insight which is sadly lacking in many UK yachting magazines.
Posted by Bursledon Blogger at 10:08