We could hardly visit the north east without stopping by at the seaside town of Whitby at the mouth of the river Esk, one time home of Captain Cook and famous for the ruined gothic abbey and association with Bram Stoker's Dracula. 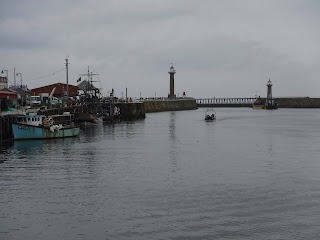 Above the protected entrance and twin lights jutting out into the often time inhospitable North Sea. 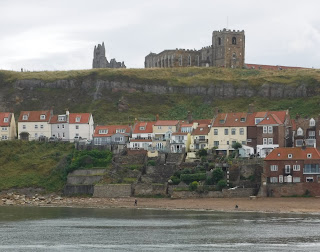 The ruins of Whitby Abbey, where Cædmon, the earliest recognised English poet, lived, stand high above the town on the south cliffs, next to St Mary's chuch at the top of the 199 stone steps. 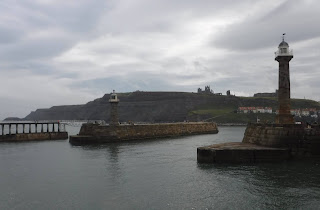 Tourism started in Whitby during the Georgian period and developed with the arrival of the railway in 1839, which presumably gave a boost to the town's wealth beyond that generated through fishing.

Its attraction as a tourist destination is enhanced by the proximity of the high ground of the North York Moors national park and fascination with the horror novel Dracula which continues to the present with the annual Goth weekend, a a twice-yearly music festival for the gothic subculture 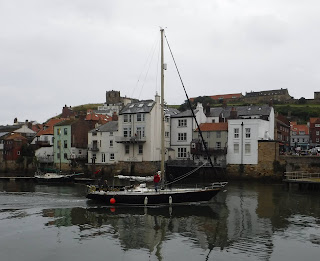 Above a yacht safely inside the entrance and making way towards the swing bridge which cuts off the inner harbour/river.

No visit to a northern seaside town would be complete without eating fish and chips while sat on the sea wall and as expected they were very good.
Posted by Bursledon Blogger at 06:30