Apparently Cerveza didn't qualify to be described as a "gentlemen's yacht" because she was built for a Scottish butcher before the war, trade money not inherited, how's that for nautical snobbery. 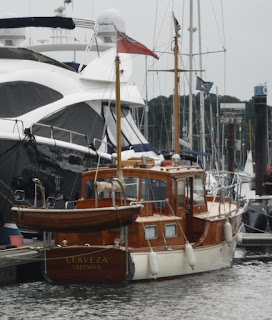 Fortunately the current owner, however he makes his money takes very good care of her and is very approachable.

He was chatting to some friends of mine in the marina recently telling them about her history, Apparently Cerveza saw service during WWII patrolling the mine fields off the west coast of Scotland. She's been sunk twice but clearly survived, thankfully. Just lovely.