My post on Roche rock prompted some comments about English churches often being built on the site of previous pagan places, the yew tree is a popular accepted sign that the church was built on a previously pagan site. Indeed there are accounts that in 601 A.D. Pope Gregory advised the clergy not to destroy places of Pagan worship but to convert them into Christian Churches. 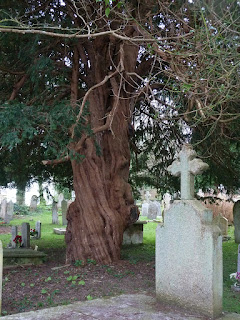 The yew tree had been connected with the journey to the underworld in many pre Christian religions and as an evergreen plant the yew was perhaps a symbol for the regenerative power of nature.

It may also have been that wild yews became scarce due to the early medieval longbow production, while Churchyards offered protective enclosures for the tree.

Whatever the history the yew in the church yard of St Mylor's on Carrick Roads provides shade and peaceful protection such that it seems a very intrinsic part of a sacred place.

More locally when not rowing, fellow blogger Chris Partridge maintains an interesting blog "Looking at Sussex Churches" many of which feature a yew tree in the grounds.
Posted by Bursledon Blogger at 04:39