Next train to Exbury Junction

With Joe's interest in railways we've been visiting model railway exhibitions during the winter weekends, this is one of his favorites not only as it features Thomas the Tank Engine and his friends, but the owner has set it up so that small children can drive the trains using a "Scalextric" controller. 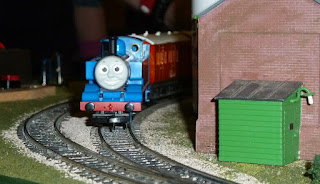 This model was intriguing, based on an imaginary branch line to Exbury in the New Forest. Apparently the "South Western and Isle of Wight Junction Railway" really did plan to dig a two and a half mile tunnel under the western Solent to link the Lymington and Freshwater lines. The Solent Tunnel Project was approved by an Act of Parliament in the 1903, but the project was abandoned during the First World War of 1914-18. 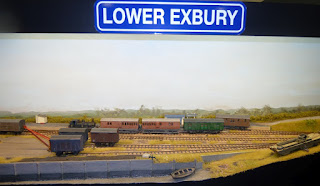 The modeller who created this layout based it on an imaginary spur, which would go off from what would have been the main line, leading down to Exbury on the Beaulieu river, clearly the landing craft sets the scene during or after WWII. The line would also be used to carry bricks and other goods from the Exbury estate.

What a great and imaginative project.
Posted by Bursledon Blogger at 12:43