How it all started

Clearing out the attic recently I came across these two copies of Light Craft magazine, I can remember my dad taking me to the Earl's Court boat show for the first time and I'm guessing it was in 1964. He came back with the idea of building the Goblin dinghy which featured in the January edition. I can recall the plans being on a shelf in the garage probably until we moved in the late 1970's, alas other things got the way and he never got beyond looking the plans over from time to time. 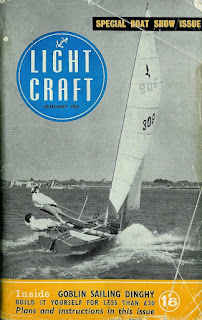 The February 1964 edition has a Firefly dinghy on the cover, almost 50 years on there's a fleet at Hamble River Sailing Club which shows the appeal of the design. 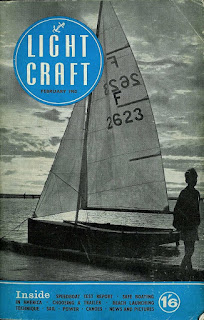 Despite the small format and poor quality black and white photographs what is interesting reading through these old magazines is the broad approach they took to boating, sailing dinghies, small yachts, motor boats and even canoeing was featured, very different to the highly polarised and focused boating magazines of today.

All that for cover price of One and Six (One Shilling and six pence, that's 7.5 pence today!)
Posted by Bursledon Blogger at 03:15