The not so great fire of London

Walking along the South Bank yesterday just after lunch it was obvious that there was a serious fire over near the Strand. 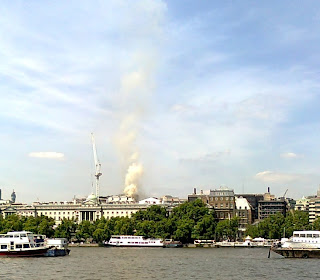 I had a meeting over near Gresham Street and on the way back heard from the taxi driver that the Strand was closed and around a dozen fire engines and vehicles.
From the news reports the building is Marconi House on the junction of the Strand and Aldwych which is being converted into a luxury hotel. Around 75 fire fighters were called in to fight the blaze which seemed to have wrecked most of the roof area but was under control when I left work - lots more pictures here
Posted by Bursledon Blogger at 08:08