We dropped by our friends Jax and Robbie to deliver one of Erica’s cakes as they are just about to depart for an extended cruise, destination unknown, most likely the Caribbean, perhaps the Pacific and even the very edge of the known world.

With just days to go I’m sure they won’t mind when I say there was a certain tension on board. The boat was just full of stuff, stuff which hadn’t found a permanent home, stuff which was being moved from one place to another and stuff which was needed for those all too numerous last minute jobs. It was all very familiar and brought back fond memories from when Erica and I set out for the Caribbean. It all finds a place, it all sorts out and finally land, home, friends, are all left far away, below the horizon and you can relax and enjoy the voyage. 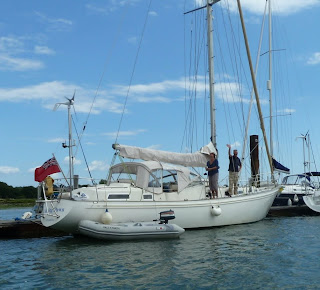 With the appalling weather since Sunday it doesn’t look as though they will get away much before the middle of the week, but that’s one of the delights of cruising, no deadlines and if the weather isn’t right then don’t go.

You can follow their blog - search for Spring Dawn, which incidentally is a Rival 41 a tough and renowned seagoing boat.