Snow on the coast

We were travelling to Belgium at the weekend to visit some friends in Ghent. Leaving early Saturday morning, the met office was issuing weather warnings of snow right along the coast of Kent, Sussex and Hampshire.

In the event the only snow we encountered was as we approached Dover, where a couple of inches had settled making an unusual sight of the famous white cliffs with matching white beach. 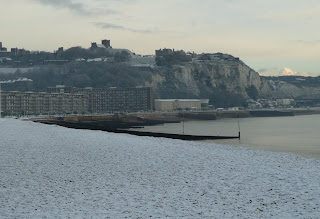 Across the English Channel, only 22 miles or so away, there was bright sunshine when we arrived in Calais and so it continued. Apart from a small area of snowfall around Bruges, it was a clear, bright, if bitterly cold weekend in the parts of France and Belgium we travelled through.

Returning to Calais on Sunday evening, the town was covered with a thick layer of newly fallen snow, which made for a rather spectacular beach scene. 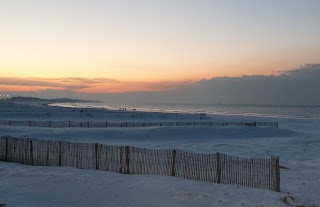 Fortunately, back across the channel in Dover there was no sign of snow.
Posted by Bursledon Blogger at 20:16