This old cabin cruiser is a long way from home, moored down at Bursledon pool, she was built for the sheltered waters of the Norfolk Broads and area of flooded wetland in the east of England. 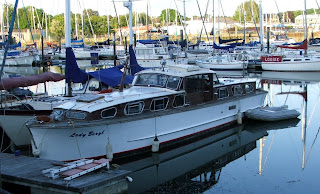 I've passed her many times thinking she was just a displaced riverboat, until I spotted the name "Lady Beryl". I remembered a boat of that name on the Thames during the 1980's, I think she was kept near Old Windsor and was reputed to have been owned by Gorge Formby the actor and entertainer and named after his wife.

Some research suggests she is in fact the same boat, built in 1950 in Wroxham, custom-built by Windboats, designed by Graham Bunn and one of the largest Broads cruisers ever built.

George Formby and Beryl cruised the Norfolk Broads during the 1950s. The boat was sold around 1960/61, since when she has had a number of owners and more recently was used as a houseboat.

For those interested there is some recent discussion on the Broads Forum
Posted by Bursledon Blogger at 10:19