Steve's "Log of Spartina" post about Rattlesnake Bay got me thinking about names along our coast. While we don't have quite such evocative names the south coast of England is both ancient and dangerous.
One of may favourite places is Misery Point in the River Yealm in Devon, interestingly visited by another John Welsford designed boat in the summer, a Navigator - "Arwens Meanderings".
Both Erica and I all too well remember being holed up in the Yealm while a gale howled all around and the wooded hills shook, the harbour master came over to collect his dues with the greeting "Blow'n a hooley up at Misery!" 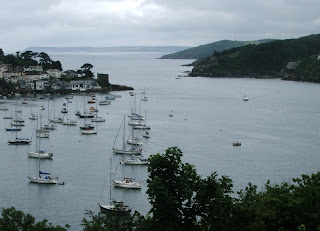 The west country with its rocks and cliffs provided some more interesting coastal names from our old log books. Starting at Fowey with Gribbon Head, seen above and marked by the red and white tower (top right of the picture).
Sailing eastwards - Blackbottle Rock, then into Lantic Bay via Pencarrow Head, Watch House Cove, Palace Cove, Parson's Cove and Broard Cove, all hove into view before you reach Shag Rock and Blackybale Point.
Posted by Bursledon Blogger at 07:09