Jolie Brise returned to the Hamble in September. The famous pilot cutter built by Mr Paumelle in Le Harve in 1913, arrived in time to compete in the Cowes Small Tall Ships race in early October.

Despite a good start Jolie Brise was sadly in collision with Rona II, when the Holman & Pye designed training ship tried to tack behind Jolie Brise, but failed to free the mail sail sheet. Fortunately no one was hurt, both boats retired and the damage will be repaired over winter. 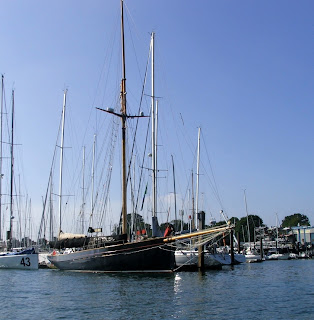 Jolie Brise famously won the first Fastnet Race back in 1925, and is now owned, maintained and sailed by the pupils of Dauntsey School.

Over the years I'm sure Jolie Brise has been a regular visitor to the Hamble, if you ignore the modern masts in the background below, you can almost imagine her in her back in those days... 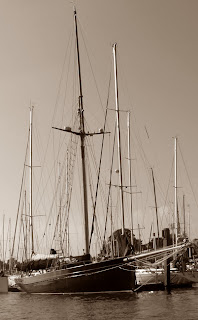