Passing this yacht in a local marina, I had to do a double take. 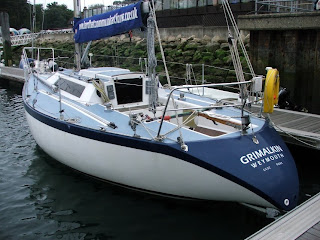 Grimalkin, apart from being the name of Nostradamus's cat, was the sloop at the centre of the 1979 Fastnet disaster. Over 15 sailors participating in the offshore race lost their lives as hurricane force winds swept up the western approaches in late August of that year.

Of 306 yachts in the fleet racing out to the Fastnet rock, in the terrible conditions, 69 did not finish the race and 23 were either lost or abandoned. Of those Grimalkin was perhaps the most famous and most tragic. Having suffered several knockdowns, Grimalkin's owner was lost overboard, and two crewmen left critically injured. The remaining crew abandoned the 30 foot yacht, into the life raft. The yacht was later recovered, one of the two crewmembers, who had been left aboard, presumed dead, was still alive. 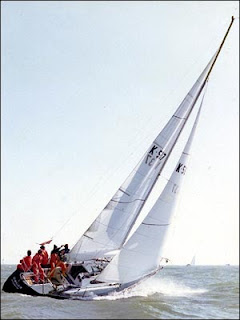 Some internet research suggests that Grimalkin was subsequently refurbished, so I’m guessing this is the actual yacht. Comparison with the photo above, taken during the 70’s seems to confirm.