Sailing has a reputation as an expensive and elitist sport, with yachts being described as "holes in the water into which you throw £10 notes " (or the large denomination bank note of your choice). Clearly if you want a mega yacht you'd better have mega bucks to fund it, but getting out on the water doesn't have to be expensive.

We spotted this run down First Regatta for sale, asking price Euro 2000, rumour around the port was that the owner would take an offer on that price. 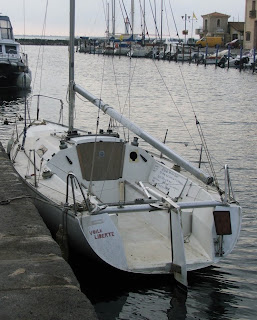 Now even with the current exchange, rate a 28 foot boat for under two grand seems like a good deal to me. You clearly have to accept she's not going be competitive without some serious money spent, but as a fast day sailor/weekender, lots of fun. A quick polish and a tidy up will have you afloat for not a lot. 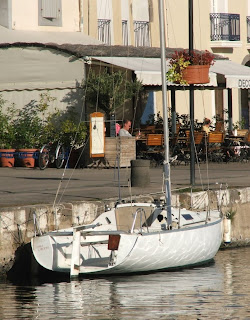 A spirited afternoon sail, followed by dinner and a couple of bottles on wine at a waterside restaurant and somewhere to crash at the end of the night. There's a lot to be said for this minimalist cruising.