We saw Morwenna alongside in Cowes on last Saturday, but it wasn't until she appeared with her bright orange storm sails set, along with the rest of the Fastnet fleet on Sunday morning, that we realised she was entering the race. 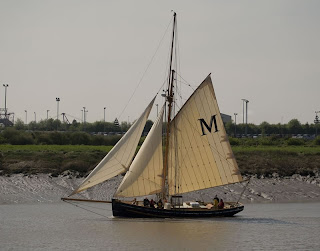 There's also a direct link back to Jolie Brise, which although a French Le Harve pilot cutter, was the winner of the very first Fastnet race in 1925.

In the 80 add years since Jolie Brise set the standard for offshore racing, things have moved on somewhat. While the 100 foot Leopard took line honours, arriving in Plymouth in 2 days 11 hours, Morwenna was following the rest of the fleet, still still heading out towards the western approaches. 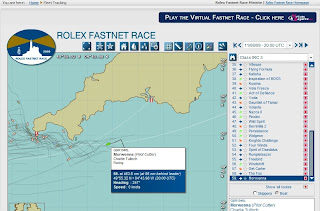 This morning six days out Morwenna was on a northerly course heading for the finish at Plymouth. She may not have been the fastest entry, but she's certainly my favourite 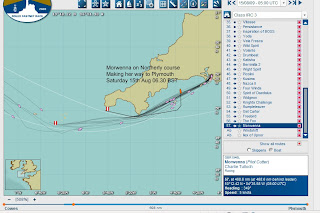 Morwenna was a 5th century Cornish saint who made her home in the cliffs near Bude on the wild north Cornish coast. The derivation of her name is believed to be maiden or white seas, which seems to be an entirely appropriate name.
Posted by Bursledon Blogger at 06:17