The recent episodes of Dylan Winter’s “Keep Turning Left” - YouTube video diary of his circumnavigation of the UK in a Mirror Offshore motor-sailor; have featured the east coast rivers.

Watching the West Mersea racing fleet catching the early morning tide, I spotted this fantastic looking keel boat. An email to Dylan asking what it was, received a reply suggesting that I contact West Mersea Yacht Club, which I did. A few weeks and a whole email trail, later I received a note from Greg Dunn owner of Black Diamond 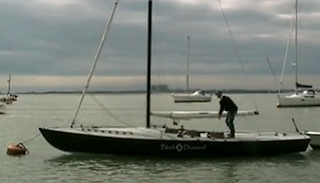 Hello Max, my name is Greg Dunn, and I am the current custodian of Black Diamond, and your message got to me via the good people listed.

She is a Yachting World Diamond, built in 1962, from the design by Jack Holt, who was commissioned by Yachting Monthly in 1960 to produce a home-build racing keelboat that would be affordable to the common man.

What he designed was quite remarkable in that it was the first planing keelboat (Uffa beat him to it with the Flying Fifteen, but that is generally accepted to be a dinghy). All the more remarkable, as it is basically a Mirror dinghy on steroids, with a pointy bit added.

The design was double chine plywood, but Black Diamond has been epoxied by the fellow who restored her, and is in surprisingly robust shape for her age; especially considering the punishment she gets - a boat which needs a yachtsman’s gale to lift her skirts!!

Holt’s design had some inspired thinking, like bringing the forestay through the deck, three feet behind the bow to allow a spinnaker chute (I don’t have one on BD, but thinking about it !) and a removable keel to allow for easier trailing and storage (she is a monster on the trailer!). All that plus packing a thirty footer in under a tonne, was also quite a feat. 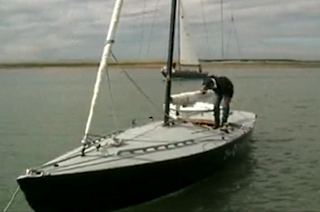 The boats were originally called the YW Keelboat, but changed in 1967 to the Diamond. Boat No 1 was Zest, which I have recently seen in a shed in Southern Holland, totally original and stripped back to the ply for repainting.


There are many hybrids, as most Diamonds have been fiddled with at some time or other, and mine quite a lot. The design had great qualities, but back in 1960, underwater dynamics were not then a fully explored science, the keel and the rudder are, quite frankly, disaster areas! I have put up with my keel, but am planning to take the back edge down to a point next winter.

I did pay a small fortune to have a carbon fibre rudder designed and moved three foot aft of the unbalanced monstrosity she came with. This turned what can only be described as a dog into the last boat in the fleet to drop the spinny, the control is utterly amazing! 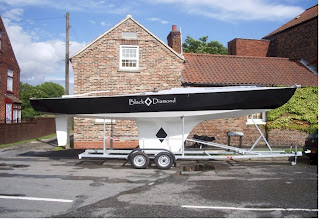 I’m not claiming to have had the idea, I went to Australia to research the Diamond, where they still race them in class, with two guys on trapezes, and discovered Saltash 11. The story of the rudder is told at Sailing Anarchy on this link http://www.philsfoils.com/Diamond/diamond.html

I will close with a tale about Saltash 11, the Aussie Diamond that the rudder idea was stolen from. She is owned by a Brisbane boatbuilder called Ian Wright, who is, to be fair, Australian boating aristocracy. They have done a lot to her, higher mast, closer rigging, bulb keel designed by Iain Murray, sugar scoop transom and the rudder pictured, but she is a legendary boat in Oz, having won the Brisbane Gladstone Race (second behind the Sydney Hobart) no less than eight times. I was talking to Ian Wright about that, and asked his fastest time for the 308 nautical mile race. He replied, “a shade under31 hours.”

I said I understood that was the corrected time, but he stopped me in my tracks by saying laconically that the time was the elapsed time on the water!

308 nautical miles in thirty one hour;s in a forty year old, thirty foot boat plywood boat??!! He did say it was a bit windy!! And yes, she is great fun to sail!

I’d like to give a quick thanks to Greg for this great reply, also to Dylan, the West Mersea Yacht Club and all the people who took the trouble and interest to forward my email to Greg, one of whom was Juliet, who writes the excellent blog “musings from a muddy Island” – So Juliet how about a detailed feature on Black Diamond?
Posted by Bursledon Blogger at 18:12