I recently found an old copy of “More Sailing Days” by Adlard Coles in a charity shop. Published in 1947, it tells of Coles sailing adventures on the south coast of England immediately following the end of World War Two.

Leisure sailing in the Solent had been stopped by the military during the war years, but Coles was fortunate to have been granted an early permit to sail during 1945 in order to update his pilot guide and sailing directions “Creeks and Harbours of the Solent”. His first trip was to bring his pre-war yacht Zara, a diminutive 19 foot Tualare class sloop, from Itchenor, where it had passed the war years safely, back to her home mooring in Bursledon. 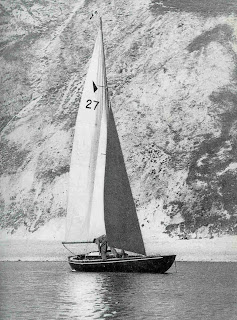 Coles entered Zara in Bursledon regatta in 1945, the first to be held since the outbreak of war. He tells of sailing the vivid red, and newly painted Zara; down the Hamble river, past sailors and marines watching from the drab, grey naval launches and landing craft which used the river as a wartime base.

Navigation at night was forbidden as a safety precaution since there were no lit navigation marks and the additional hazard of unmarked ship wrecks all along the south coast. Coles gives a good description of finding his way into the unmarked Newton Creek using the transit of a tower which was visible up on the Wight downs. Despite our best efforts we couldn’t find it on our recent visit to Newton, presumably it hasn’t survived the intervening 60 odd years since the war. 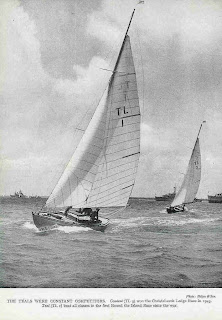 Further west there’s a charming account of Coles anchored in fog outside on Babbacombe in Devon. A fisherman appeared out of the fog rowing a small boat and after some banter and negotiation towed Zara into the harbour and safety.

At 19 feet, Zara eventually proved too small for the growing Coles family and she was sold initially replaced with the Fred Parker design Mary Aidan. She in turn was quickly superseded by the famous Cohoe, in which Coles cruised and raced extensively during the post war years. 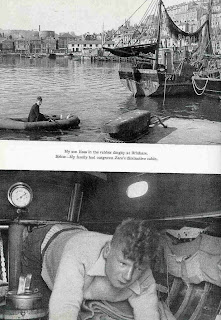 For those of us who sail the Solent and the South Coast of England, More Sailing Days gives us a view of our favourite cruising grounds, a view which is familiar yet distant; un-crowded and less hurried. When fisherman still earned their living, working out of the small harbours and us yachtsmen were in the minority.
Posted by Bursledon Blogger at 07:22