Over at 70.8% Thomas Armstrong has just done a nice post about a newly launched catboat Silent Maid. Built by the Independence Seaport Museum as a replica of the 1924 cruising yacht, Silent Maid is 33 feet LoA.
Tom's post got me thinking about catboats. Although uncommon in England, I've been interested in the cat boat type for many years, most famous of which is the Beetle Cat characterised as they are by wide beam (up to half their length) and a large single sail set right up in the bows.
British boat builder David Moss from Lancashire built a small, classic catboat during the 1980's, an example here Inisheen sailing on the Beaulieau river a couple of years ago. 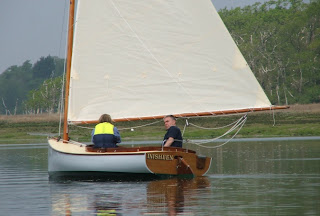 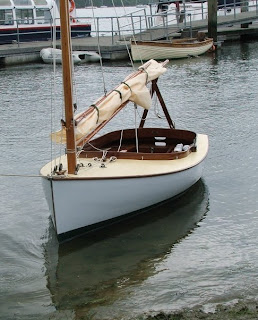 David also built a larger 16' catboat around the same time. 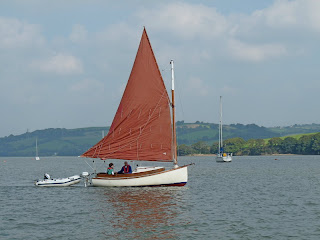 My own cat boat is Tosh , a Cormorant dinghy built by Cornish Crabbers. Designed by Roger Dongray, she is a modern interpretation with a high aspect gaff sail and narrow foils, rather than the traditional barn door rudder, just the thing for a lazy day sailing along our wooded rivers. 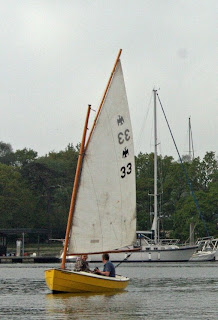 Her dimensions are beam 5'7" and length 12'3", which puts here close to the "two fathoms long and a fathom wide" catboat description by Bill Garden in his delightful book "The Making of Tom Cat". 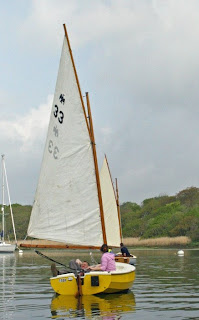 Simplicity and stability make Tosh so relaxing to sail, although perhaps I'm slightly too relaxed in this picture 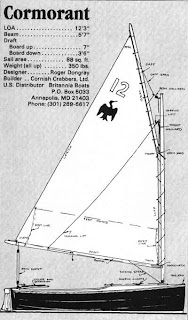