We were in France again for the autumn half term holiday, quite a few people ask what the Eurotunnel between England and France is like, and for us the answer is really good.  Our experience, as you arrive  the terminal the number plate recognition systems pulls up your details instantly, stop for a coffee and stretch legs after  the journey down to Folkstone by which time it's time to drive onboard the waiting train. 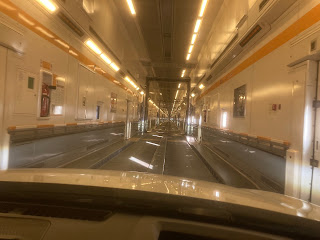 Above, we were the first car on the train,  would have  been interesting to record the distance 200 or 300 meters maybe. After that it's sit back, in my case snooze and half an hour later drive off pretty much straight onto the French motorway.

This year especially, both the French and English passport/customs checks have been very smooth, even with the post Brexit changes.

Especially at this time of year it beats bouncing around for hours on a ferry like we used to. 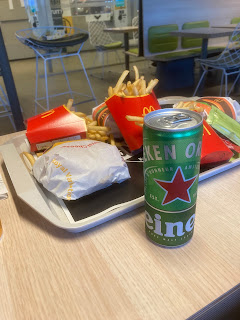 We stopped off in Coquelles for something to eat, maybe not typical French food but they do serve beer in McDonald's.