Between the rain and work I managed to get out for a run on a fine clear day, if I'd had more time it would have been a great day to go rowing but a 30 minute run at lunch was all I could fit in, such is life these day 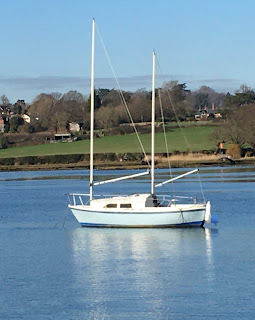 This Hunter Liberty was looking especially nice on her mooring and it's an interesting boat. Also built  curiously as a 22 and 23 and as the Hunter Minstrel with a gaff rig as sailed by Keep Turning Left author Dylan Winter.

The Liberty as above has an unusual ketch rig, the boat designed by David Thomas used a simplified and loosely based version of Gary Hoyt's Freedom concept. American's often call it a Cat ketch an also similar version is used on the Core Sound dinghies by B&B Yacht Designs.

With no genoa sheets to attend to, apparently tacking and gybing is really simple just a matter of putting the tiller over and waiting for tehe sails to slide across. The Liberty uses conventional mainsail type sails rather than the wrap around an un-stayed mast and wishbone boom of the freedom rig.