Ex Morning Cloud. It's an appropriate name considering Ted Heath spent six of his ten years as leader of the conservative party in opposition. 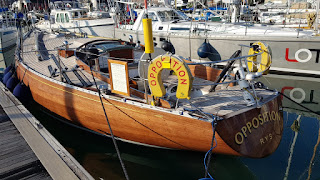 Those of us who grew up in the 60's and 70's probably remember Mike Yarwood doing an impersonation, singing Life on the Ocean Wave, filmed allegedly under the dispatch box in the House of Commons , where all you could see were his sea boots and an anchor, as the then prime minister locked horns with Harold Wilson. 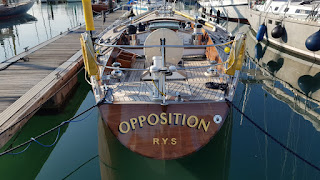 A boat from a different time, the three day week, regular blackouts and power cuts,  disruptive industrial  action across the country. Giles the political cartoonist who's often featured sailing perhaps caught the mood in 1974 with a picture from the London boat show where an obviously wealth woman asked the yacht salesman "have they taxed the wind yet" 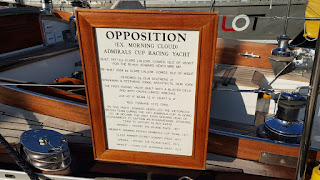 Very typical racing yacht of its day, built by local craftsmen in wood as a one off with an enviable list of wins, great so see such a historic yacht being looked after. 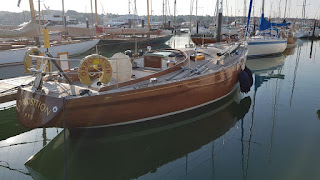