An interesting vehicle parked down at Swanwick hard the other day, loosely based on the WW2 DUKW amphibious truck, colloquially know as a Duck. 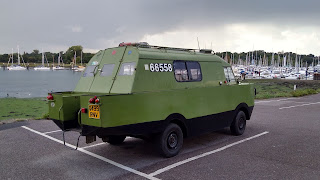 The original DUKW was designed in partnership with non other than the naval architect firm Sparkman &Stevens. This more modern interpretation was remarkably,home built based on a variety of components the builder collected from various scrapyards including. What a fantastic project. 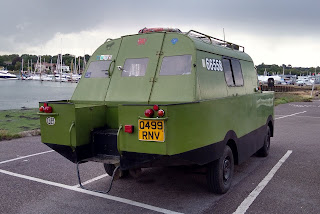 Chatting to the owner/builder he's crossed the Solent a couple of times down at the western end between Lymington and Yarmouth. He was down at Swanwick accessing the slipway and how the harbour dues introduced by the harbour board might be applied, after all he's already fully paid up on his road find license. 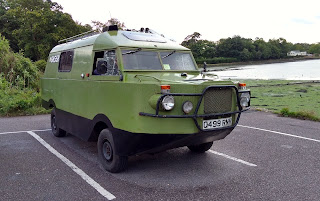 Would have been great to see it afloat.
Posted by Bursledon Blogger at 06:30