Hardly an inspiring photo, but I was intrigued having discovered a very local dinghy. It's a Jacqueline class dinghy which were built on the fore shore at nearby Hill Head. A member of Hill Head Sailing Club has some much better pictures of one he restored in 2006 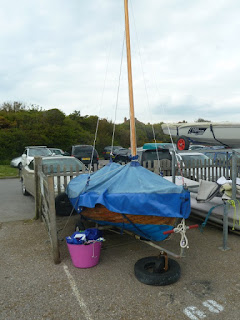 Getting details is difficult but from what I can gather the class was conceived and designed by local boat builder Tommy Robertson during the late 1940's, by 1961 four boats were sailed by members of the Hill Head Sailing Club and the class was adopted as the club's One Design at the club's AGM of the same year.
Around 28 boats were built in all.

Demanding open-water conditions off the Haven entrance combined with sheltered water inside dictated the sort of centre boarders sailed from Hill Head for many years - steady boats, well-behaved in a seaway, generously-built without the concern for lightness that is important today when so many boats are kept ashore between sails. against that background, when Tommy Robertson formulated ideas for a new class of 12-footers for the club in the mid-Forties, he combined the Hill Head tradition for seaworthiness with a boat not too hefty for young members to handle. The Jacqueline Class eventually achieved enduring fame - and lots of admiration from visiting sailors - as Hill Head's one and only "home grown" One-Design class.

I have to confess for more than a passing affection for varnished, clinker built dinghies like these.
Posted by Bursledon Blogger at 05:00