Not often that you see one of these around the Solent, it's a Freeman 22 cruiser which was a very familiar sight on the river Thames during the 1960's and 70's when I was growing up. 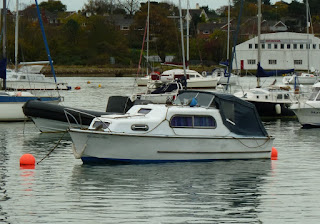 This looks like a Mk 1 which according to the Freeman Cruisers website was introduced in 1957 and  sold through until 1963 when the Mk 2 came along without the stepped cabin roof and thus giving increased headroom.

The story is fascinating, John Freeman was building caravans when he had the idea of what is effectively a cruising caravan for inland waterways, the boat was an instant hit with spacious four berth accommodation and high quality woodwork and became ubiquitous on England's inland waterways.
Posted by Bursledon Blogger at 06:00