Growing up near the Thames we used to visit the locks at Bovney, Bray and Boulters and watch the boats going through. I can just remember in the very early 1960's the old manual wheels which worked the sluice paddles before they were automated, somewhere there's a black and white picture of me as a small child sitting on one of the arms which opened the gates.

It was interesting then, to see some of the old traditional locks in the Netherlands. They are operated by windlass, using chains which pull a boom attached to the lock gates forwards and backwards to open or close. In the top picture there's a third windlass which operated the sluice gate 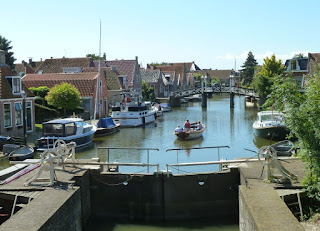 Here's a close up of one of the gate windlass, the lock has been there for well over 100 years so I'm guessing the windlass is of similar age and is built in typical Dutch decorative style. 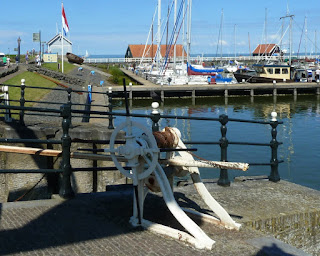 Most of England's canal locks are still manually operated so there's plenty of scope for practice. About 20 years ago, I lived in Husband's Bosworth, my Dad at the time was cruising the canals in a narrow boat. Somehow he always seemed to call me when he was at nearby Foxton, where there's a flight of 10 consecutive locks all waiting to be worked!
Posted by Bursledon Blogger at 09:38