Saturday morning started with early clear skies and a slight ground frost promising a fresh winter's day. Then some early rain came through threatening to spoil things, but by the time we'd had breakfast the sun was out again just as the fleet was assembling in the Lymington River for the annual Needles Relief Race. 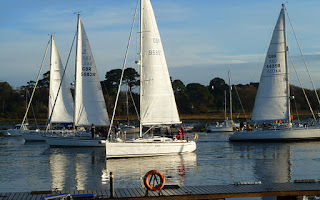 Organised by the Royal Lymington YC the race takes place in the western Solent and was originally organised to provide Christmas relief to the lighthouse crew who manned the nearby Needles lighthouse. Since the light was automated the event has been run as a charity event to support the RNLI (Royal National Lifeboat Institution). Weather and tide permitting, the course for Class One yachts sail out to the Needles and back to a finish near Yarmouth. 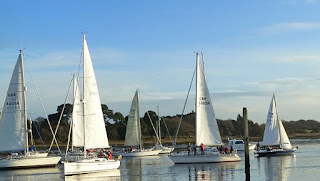 It's not unusual at this time of year to see Solent race crews embracing the Christmas spirit with fancy dress. Over the years we've seen more than a few sailing Santa's, we've been passed by a a race boat with row of Santa's elves sitting on the windward rail, but possibly the best one was the Nativity crew, complete with shepherds, three wise men and a big star hanging in the rigging.
Posted by Bursledon Blogger at 17:21