Built in 1936 by the British Power Boat Company across Southampton Water at Hythe, High Speed Launch HSL 102 is out on the hard for some maintenance. One one of only twenty two examples of the 100 Class High Speed Launch, 64 feet in length, 19 tons with a maximum speed of 42 knots. 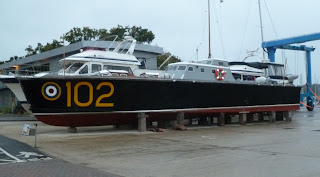 No 102 saw service during World War II operating on the north east coast of England. During a 2 month period in 1941 she rescued 38 airmen from the cold waters of the North Sea including two German bomber crews. As a result of those successful missions in July of the same year she was inspected by King George VI and the Princess Elizabeth, now Queen Elizabeth II. 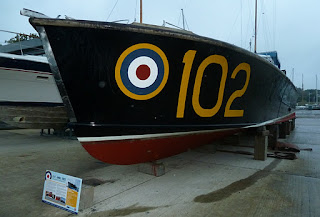 No 102 was bought by an enthusiastic owner in the early 1990's and underwent an extensive restoration, today she is operated by Portsmouth Naval Base Property Trust and receives funding from the National Heritage Memorial Fund. She is available for charter.
Posted by Bursledon Blogger at 03:56