I couldn't resist buying this old Scow, it's been badly neglected and I paid a bit too much for it, but it was still cheap and will make a great boat for Joe. 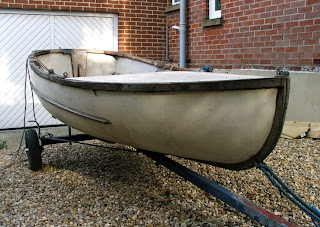 The Scow is a local boat with fleets at boths end of the Solent sailing from Chichester, Bembride, Yarmouth, Lymington and Keyhaven. Originally timber built the design goes back to the 1920's when a one design was established.

This latest acquisition to our "fleet" was built by Field Aircraft Services of Tollerton, Nottingham during the mid 1950's. Apparently it was their first attempt at boat building, in order to diversify the business which had experience of making fibreglass aircraft components. It was the third off the line, it is believed all 3 went to managers in the company. 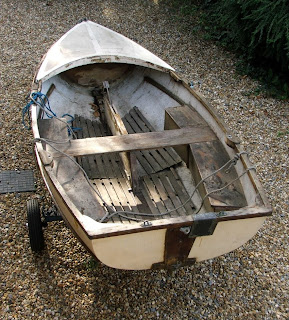 Unusually it was marketed as a Scow with a Heron set of sails, rather than the normal lugsail. Clearly there's a quite a bit of work to be done before I get around to replacing the rig.
Posted by Bursledon Blogger at 01:12