The eastern Solent was looking a bit crowded on Saturday afternoon, at one point we could see six large freighters in line coming in past the Nab Tower.

In the center of the picture is one of the Palmserston Forts, built to protect the Solent against the perceived threat of a French naval invasion. I think this one the No Man's Land Fort as we were up in Stokes Bay, but it could be the Spitbank Fort, to be honest I wasn't paying that much attention!!

Further west, we stopped off at Hill Head, looking east the late afternoon sun was lighting up Lee on Solent.

But turning west there was some cold, grey sky moving in over Calshott, time to head home. 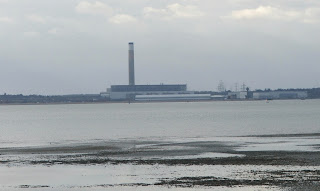