The problem with designing something is you’re never sure that you’ve done a good job until it’s been thoroughly tested.
When I designed and built a rowing skiff (Gato Negro) a couple of years ago I wanted a boat which was fast, but one which could also handle rough, coastal waters. The sort of boats I had in mind when I put pencil to paper were John Welsford’s Joansa, Phil Bolger’s Gloucester Light dory, with a bit of a Whitehall and a Cornish flash boat thrown in for good measure. 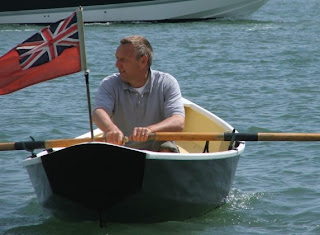 Last Sunday was very windy, but I needed to go down to our yacht (Greta) and so took the opportunity to see what the rowing skiff was like. Launching at the hard, things didn’t seem too bad, but as soon as I cleared the moorings, I was heading straight into wind which was screeching down the open reach of the river. To give you an idea of the conditions, I only made progress on the stroke, the combined wind and frequent, nasty little waves held her back unless I was pulling on the oars. Every time there was a lull, I’d row like mad to make progress only to be stopped again while the next gusts came through.
Although the midsection design started off something like a Swampscott dory, I put some dead rise in the bottom planks, partly to make the mid section more rounded for speed and partly because I simply don’t like flat bottomed boats (apologies to those who do, it’s a personal thing). The topsides have quite a bit of flare (picked that up from dory design). It all comes together in a sharp, raked bow, which I thought would be good even at the cost of waterline length. 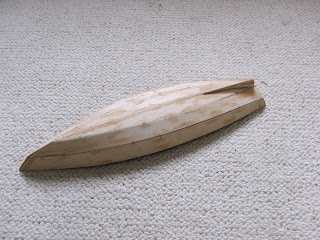 Overall it worked really well, fine bows cutting through the chop and pushing the spray aside, keeping things pretty dry. I previously have been concerned by slamming in big waves (and especially motor boat wash – although there were none to be seen on Sunday!). Back in June, Gavin Atkins had some interesting pictures on his “In the Boatshed” blog; of a boat rowing through rough sea, it was really useful to see how the boat worked in those conditions, something you clearly can’t do when you’re rowing your own boat. I’d previously concluded that additional weight forward might reduce pitching and thereby slamming. 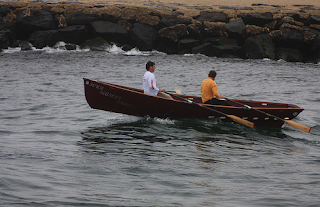 On Sunday I placed a 5 litre water bottle in the bows which did the trick (apparently it works for dory’s – thanks also to John Welsford for the advice).
Coming back home was a down wind row, it was even more interesting, the wind had increased (I later found out it was over 40 knots), Gato ran pretty straight down wind, only getting slightly uncontrollable if I rowed too fast. Without rowing, she was fast enough and very easy to control by just trailing one or other of the oars lightly in the water. It was clear that she would sail nicely off the wind with a small rig if I ever go down the route of putting a sailing rig on her. 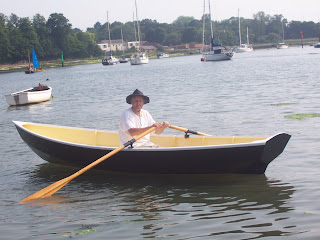 Rowing across the wind the boat she actually became more stable, the boat has always been very able to take waves on the stern quarter I presume because of the high transom and long keel skeg..
All in all Sunday was a great opportunity to test the design and I came back feeling pretty pleased.
The “health and safely police” will be pleased to know I had a lifejacket on at all times!!
Posted by Bursledon Blogger at 19:56