For a Sunday meander and with winds gusting up to about 20 knots, Joseph and I decided to sail the dinghy up river where things were not quite so brisk. We stopped off at a midstream pontoon to eat our picnic lunch where this classic Nicholson 55 is moored. 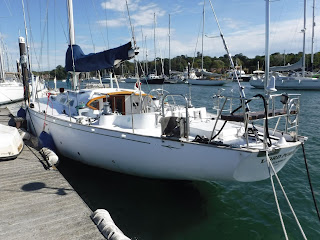 The Nic 55's were built in small numbers (around 26) from 1970, the first was built as Lutine for the Lloyds  of London YC. The Joint Services Association (Royal Navy, Army, Royal Air Force) owned 7  which were sailed around the world primarily by service men and women during adventurous training events, the boats being ideal for a large and tough crew.

I recall they were sold off probably 15 or so years ago. 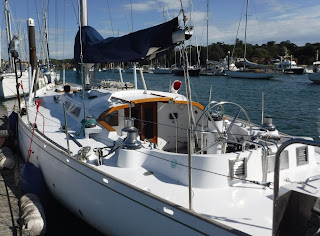 Lord Portal has apparently circumnavigated the world 3 times, not sure if she was a JSA yacht but seems likely.

That cockpit and open dog house is fantastic, you can imagine watch keeping, safe and sheltered with a cup of tea on a cold night.
Posted by Bursledon Blogger at 19:59