Joseph likes sailing in company so we were thinking about a Wayfarer as a family boat we could all day sail for picnic. Having owned a "woodie" No 176 years ago we knew it was a boat that would be safe for pretty much anywhere we wanted to go around the Solent.

But the World's apart Wayfarers are an old design and there's the old saying never go back, so we ended up with one of these a Laser Stratos centre board, pretty much the Wayfarer concept brought up to date. 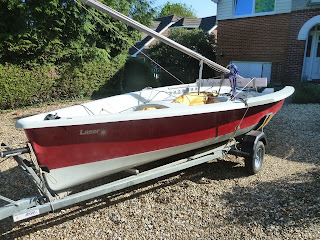 It's lighter and the mast is a couple of feet higher, plus without the fore deck and the rear locker there's a lot more space. I also like that it's self draining and has flooding side tanks which are supposed to make capsize recovery easier. Overall while it's nearly 20 years since we had the Wayfarer I get the impression the Stratos is a faster boat and better in light airs. 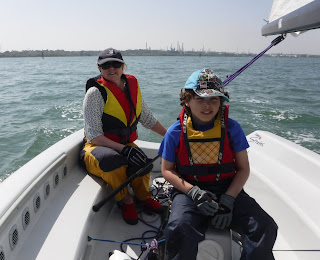 Despite the high pressure and late afternoon HW over the bank holiday weekend we managed to catch the sea breeze for a fine afternoon sail across to Ashlett creek arriving back just as the wind was dropping away. 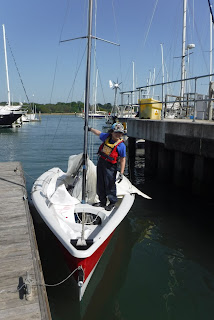 Joseph is mad keen to get the asymmetric out but wants to do his RYA course before we do, ignoring the fact that mum and dad sailed half way across the Atlantic under spinnaker - the perception of youth! He's also keen to try the trapeze.

A friend at the yacht club asked why I've bought a boat with no varnish or hemp, but  all in all seems like a good addition to the fleet
Posted by Bursledon Blogger at 06:30