Regular readers might recall that we sold our yawl Greta in the summer. I put I put her up for sale thinking that it might take some to find a buyer, but in the event she sold within 3 weeks including the normal delay while the buyers survey was carried out.
So while we have found ourselves without a yacht during what has been one of the best summers for years, we’ve managed to do some sailing thanks to friends, plus we’ve sailed our catboat Tosh and have used the time to do quite a lot of rowing.
While it’s all been nice, finding a replacement for Greta is becoming something of a challenge. 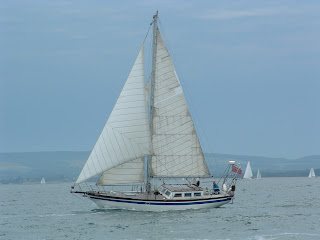 Actually the story goes back further, we bought Greta as a downsize from our Endurance 35 Angelina, (above) a 16 Ton cutter (TM). Angelina was a fantastic sea boat, heavy, stable and would drive to windward in 30 knots of wind (normally as we were getting down to the west country for start of our summer holiday!!).
Being big and heavy, she wasn’t especially lively for weekend sailing, the gear was all heavy and hard work, so getting away from the mooring could easily take over an hour, putting her away at the end of the weekend the same or more.
With a very high displacement to waterline ratio - 417 and modest sail area to displacement ratio - 15.2 sailing in light air was challenging, especially in the choppy and turbulent waters of the busy Solent, where motorboat wash is a constant hazard. Strong winds were her forte, but even then she needed a lot of sail up to power her along, which meant some fairly large stresses on sails and rigging. 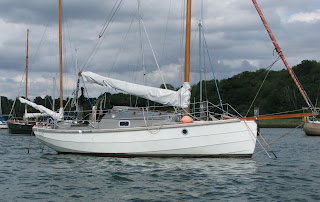 Having rethought what we wanted from sailing, we settled on Greta (above) in 2007, a pocket cruiser, rigged as a gaff yawl with good sail area. She was a delight to sail, with her light weight gear we could be away from the mooring within minutes and she was nimble enough to sail in and out of the river with ease.
Although relatively small, she was a tough little boat, proving herself more than able to take some pretty rough conditions sailing in 40 knots under reefed jib and mizzen.
So why did we sell her?
Pocket cruiser is the give away, the accommodation below was fine and forced us to be economical and tidy with equipment and clothes. Even with a new baby, there was enough room for the pushchair and Joe fitted nicely into the raised forepeak.
It was outside that we became increasingly frustrated, there wasn’t adequate room on the foredeck to store a dinghy, or even room to blow up the inflatable. The outboard had to go in an inaccessible locker as there was no room on the narrow stern to mount it where it wouldn’t interfere with the mizzen. And besides I couldn’t bring myself to spoil that lovely transom with an outboard and bracket.
I don’t like to tow a dinghy, so doing the things we really like, anchoring in out of the way places and exploring in the dinghy became a pain rather than a pleasure.
And so what next?
For a long time I’ve been talking about a fast, fun day boat, since we only live some 200 meters from the water, we could enjoy an afternoon sail, dinner at the yacht club and then home to the comfort of our own bed – sounds very appealing, but we still have the urge to overnight at weekends, and the lure of three weeks cruising those west country rivers keeps nagging away. 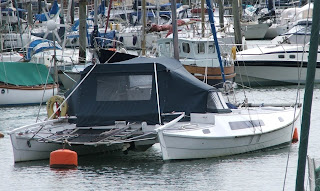 Which led us to the idea of a catamaran, fast, stable, loads of room for Joe and his toys, big windows to take in the view and extreme shallow draft would allow us to get into those out of the way places we enjoy. Anyone who’s sailed a catamaran will know there’s room on the fore deck to build a dinghy, never mind store one!

Perfect – well, perfect except… as friends kindly explained when I first had the idea, they just couldn’t see me in a catamaran and they are right, for me a boat needs to stir my soul and although it's an entirely personal view a catamaran just doesn't do it for me.