We spent a week down in the Cornish town of Fowey again recently, having a early evening drink in the Royal Fowey YC we had the opportunity to see the local fleet of Troy Class keel boats turn out for their Wednesday evening race. 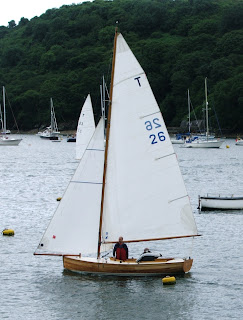 Local boat builder Archie Watty drew the original Troy design, influenced in part by another local class the Falmouth Restricted One Design (18ft). He built the first Troy - Jocelyn over winter in 1928/9, commissioned by Sir Charles Hanson for his daughter Clare.

After Watty’s death in 1949, other local builders continued to produce Troy’s right up the present, maintaining the class rule that boats must be built “on the banks of the River Fowey”. 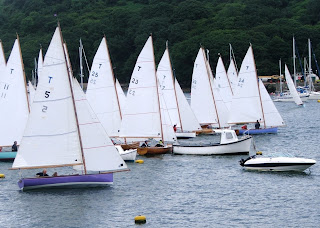 A set of Troy builders moulds now hang down from the roof beams in the club house at the Fowey Gallants Sailing Club, there are also reported to be two more sets of moulds owned by local boat builders. 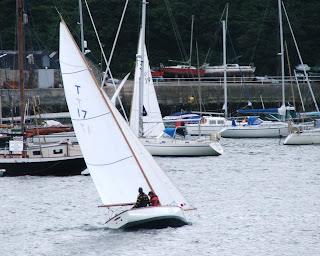 Heavily ballasted with almost 1500lbs of lead in the keel, the Troys are sailed under full canvas in the often fresh conditions and as a result, spend a lot of time with a rail down, making a good cockpit coaming essential.

With fleet numbers in the twenties and a couple of new boats being built in the last couple of years, enthusiasm for the Troy appears even stronger after 80 years.

Hardly surprising, given the idyllic sailing ground of the Fowey River and the suitability of the boat for those conditions. I’d love one!