I’m sure many of you will have seen Dylan Winter’s “Keep Turning Left” series of video’s on youtube, which document his circumnavigation of these British Isles in an elderly Mirror Offshore yacht. 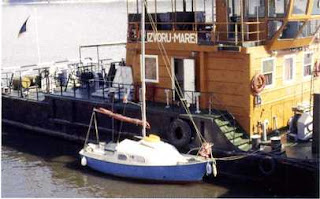 I got a really nice email from Dylan the other day and asked him for some more background to his trip.

Episode one started locally, on the Isle of Wight, covering a trip from Bembridge to Chichester Harbour.

Dylan admits that in the early stages of the trip he was just working out how to combine the camera and the sailing. In his own words “Lots of wobble- vision and wind noise in the early vids.”

Does anyone remember Hot Metal the sit com from the 1980’s, editor Russell Spam (Thomas Hardy) introduced a different version of “wobble vision” on page 3 of the fictional newspaper – send me an email if you want more detail!

Dylan has been doing both sailing and working as a cameraman for many years – but not at the same time. He seems to have mastered both disciplines, his later progams are all shot HD.

He reports on the trip.

“When I started out I had intended to do just a series of coastal hops – like most circumnavigators. I thought it might take me two summers. But work commitments meant that I stopped on the Medway for two months. I hired a drying pontoon mooring for £10 a month and had a fantastic time on a river I barely knew existed. I now feel bad about having swept past some great rivers – the Arun looks wonderful from google earth (fantastic resource) and to spend just one night in Chichester harbour was bordering on the criminal.

I then realized that to sail past the mouth of Britain’s splendid rivers was a terrible wasted opportunity – so plans changed and the journey is much more about the rivers than the sea passages. I have resolved to go as far up all the rivers I come across, as my keels, mast and tide will allow – and I am even prepared to drop the mast and venture inland. The upper Medway was beautiful but I hate the sound of the engine. I am working on a viable sculling set up.

I love old boats and birds – and even mud”

Just as a bit of background Dylan is really an east coast sailor and used to race E-Boats and Sonatas, as well as dinghies (Enterprises, Firefly’s, GP14s and Hornets).

“The reason for doing the journey is that I feel it is a bit sad to have lived on an island all my life and never sailed around it.

I know the mirror offshore is probably one of the ugliest boats ever made – but it is the smallest boat I could find with a diesel inboard and a separate heads – mine was built in 1965 in the days before they invented osmosis. 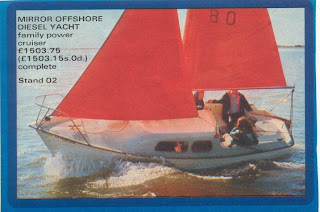 It sails like a slug compared to the E-Boat and Sonata but it does offer full crouching headroom, two six foot six inch berths.

But it was cheap (£2,200) and sits on the mud or sand or concrete and I intend to keep on abandoning her to return home for work.

I can lower the mast by myself as it is only 17 foot long – I lay it along the cabin top and put a giant tarpaulin over the whole thing. It’s a mobile boat shed.

I have a massive list of jobs to do on it – but decided to set off and do them as I go. You would be amazed to find out how many “essentials” seem unnecessary – although a gear box that allowed me to select fwd or reverse without removing the companionway steps would be nice. The roller reefing is in a pretty dire condition and the boat leaks a little – but I don’t know where from. “

Dylan’s in good company with his choice of a Mirror Offshore, I recall an account in the early 80’s of a trip the length of the Danube in one, when the Danube was still in the eastern block.

You can find his videos

The old ones are all here in the right order

Finally Dylan would welcome any feedback from sailors about the mix of boats, birds and battles.

I think it’s all great, clearly the more gaffers the better, I also agree with him about the rivers, please leave your comments.
Posted by Bursledon Blogger at 13:31