Unless you've been on a remote island with no internet connection you can hardly be unaware that December 18th was the release of the new Star Wars movie The Force Awakens. 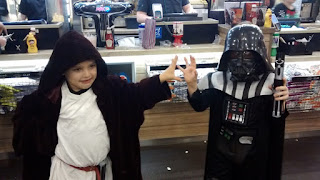 So Friday evening saw us at the local cinema with hugely excited Luke Skywalker and Darth Vader look alikes. 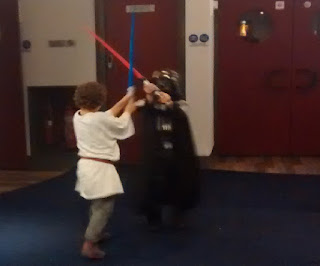 There was a bit of a disagreement over the seating arrangement which was settled by light sabre dual in the foyer.

I'm not giving anything away by saying at one point, I looked across at two very happy youngsters, sat on the edge of their seats, mouths wide open as the Rebel force swings into action in spectacular 3D. Thirty eight years after the original and still going strong.
Posted by Bursledon Blogger at 13:46