How did you learn to row?

I seem to be doing a lot more rowing than sailing these days, and certainly a lot of my posts (and indeed the blogs I follow) are about rowing. Which all got me to thinking about how I got started in rowing and how maybe others didn't perhaps get the opportunity to learn to row as youngsters and develop a skill which frankly I tend to take for granted.

There was no opportunity for rowing at school , but my Dad always messed around with boats on the Thames near our home. In my early years we had a collection of rather tatty wooden motorboats, all of which spent rather more time in the back garden than they did on the water. One exception was a small clinker sailing dinghy, which was small enough for me to row when I was around six or seven. 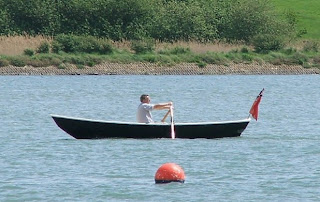 It was in the Sea Scouts that I really had the chance to develop some rowing experience (1st Datchet troop, which was actually based in Langley close to the Ford factory but who's counting) . The scout leader was an ex merchant navy stoker called Tony Mann, rough as they come, but good hearted with it.

We would go off to weekend camp (at every opportunity) to a site called Longridge near Marlow, where the Scout Association had an activity centre on the Thames. There we learned to row in wooded four man gigs. The Skipper would tell us, "you're Sea Scouts so it's up to you to show these green 'brussel sprouts' how it's done".

The routine was to come alongside smartly, at the command "way enough" oars were brought aboard, crutches (no such thing as rowlocks) fitted into holes in the thwarts, fenders put out and at the last moment the cox would ship the rudder, as the boat slipped to a halt alongside the main jetty and the "bridge" where the skipper would be keeping watch. Woe betide anyone who dropped a crutch or forgot to put a fender out, or the cox who dropped the rudder on the bottom boards with a thud. "Round again" and we'd set off to do it right next time; round again meant once around the island, about a 15 minute row. We all learned pretty fast and for those who were especially lax or lazy there was the occasional "volunteer" for man overboard drill!

For three or four years in my early teens, that's how I would spend summer weekends, cycling the 12 miles or so each way to go rowing at any and every opportunity. All too soon though the rowing gave way to other teenage pursuits, motorcycles and girls. For a while the rowing was forgotten. The university I attended was as far from the sea in any direction as it's possible to be in the United Kingdom, there was little scope for rowing other than the occasional hire boat on the river at Stratford-Upon -Avon.

It wasn't until I bought a small yacht a few years later than I realised how much I enjoyed rowing, there was as much fun to be had pottering around the anchorage in the tender, as there was sailing.

Thirty odd years later and those lessons are still with me, I find as much pleasure rowing along the river in the quiet of a cold winter day as I do giving it all in the local regatta.

So drop me a line - how did you get started?
Posted by Bursledon Blogger at 05:17