I had an email from Patrick who has an Atkin designed "Eric" undergoing restoration in Kansass , I'm guessing it's something of a rarity in the prairie state, which is not exactly known as a mainstream sailing location. Patrick has some great photos on his flickr site.

Eric is not a type of boat for the beginner to tackle and any such should confine their efforts and labor to some of the simpler and more elementary designs which have been published previously, or which will follow later in this series.

The lines show a typical Colin Archer Norwegian lifeboat of the type used by the fishermen and pilots of the North Sea, but the rig and the arrangement of the deck and interior are after the manner of American practice. "

From the pictures it looks like Patrick is making a fine job of the restoration. His email prompted me to think about double enders or canoe stern designs. This side of the Atlantic there can't be too many yachtsmen who haven't heard of Colin Archer and the legendary Redningsselskapet rescue boats he designed for service on the wild Norwegian Atlantic coast.

Much has also been written of the advantages of the canoe stern and it's ability to break following seas which might smash upon a conventional transom.

Despite this heritage double ender's are few and far between even in the Hamble river where around 4000 boats are moored. Here are the few local boats I could find.

First up is Rula, I believe made by Windboats in Norfolk, she's one of my favorite boats on the river. I'm not sure who the designer was but she definitely has influences of the Archer and Atkin designs. She came up for sale a couple of years ago and I was very tempted to buy her, but at the time I had just sold our 16 ton TM cutter and really wanted something smaller and faster. 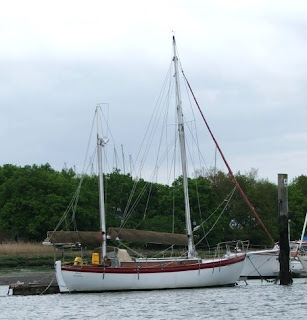 David Hillyard started his boatyard in Littlehampton back in the 1920's building a pretty little 2 1/2 tonner. By the 1950's the yard had a reputation for the center cockpit yachts,with the familiar canoe stern, mostly 12 tonners like the one below. The Hillyard yard had a reputation for strong construction, I seem too recall that all the planks were full length as David Hillyard wouldn't allow any joints.
Besides Ianthe there are two or three other similar Hillyards on the river. 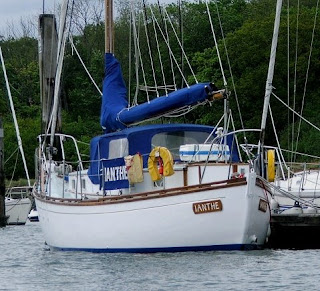 I confess I don't know anything about this pretty varnished yacht apart from thinking she looks Scandinavian. The owner always manages a wave when I'm rowing by. She is very pretty and very well kept. 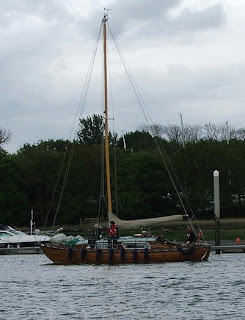 There are three or four of these Chuck Paine designed Francis 26, double ender's on the river, inspired by the Scottish fishing boats Chuck had seen on his travels, they were produced in the UK by Victoria Yachts. 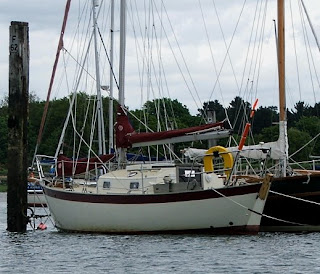 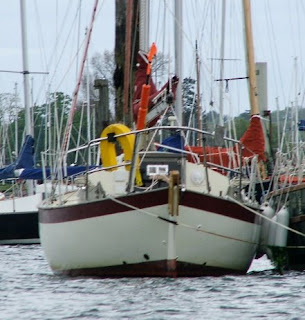 Another friend's yacht - Grace, she was build by Windboats to a design called a Norske 35. When he bought he she was in need of some TLC, but our friend, a naval architect soon had her back in shape and looking terrific. 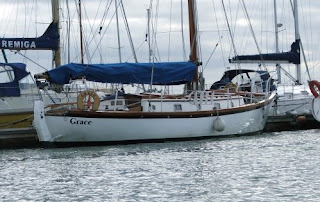