What with one thing and another we realised that we hadn't been to Cowes for well over a year. With light winds and bright sunshine forecast for the holiday weekend (well at least for Saturday and Sunday) we though it would be a good destination for baby Joe's first overnight on the boat.

A former seaport town on the north of the Isle of Wight, Cowes describes itself as - "at the centre of yachting" hosting as it does the famous Cowes Week Regatta, which has been running since 1826 and the spectacular Around the Island Race when over 1700 yachts race 50 miles around the Isle of Wight each June.

The Medina river divides the town, the two halves logically called East Cowes and West Cowes, here's the view sailing up the main channel of the Medina river.

Cowes enjoyed Royal patronage during the Victorian era when it developed as the "Yachting Capital of the World". Off the East Cowes shore are moorings for keel boat classes for which Cowes is famous, the boat is the foreground looks like a Dragon class, while the one to the left could be a Daring, a keel boat class unique to Cowes 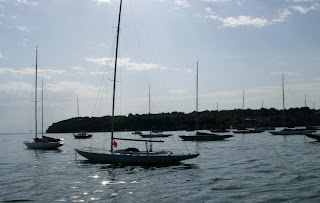 Opposite is the town parade at West Cowes, there are some remarkable buildings like the art deco apartments in the center (below). It is also the location for many of the famous yacht clubs. At far right is the Royal Yacht Squadron, also in that parade, but not in any order, are the Royal Corinthian YC, Royal Thames YC and the Royal London YC. There are a number of other yacht clubs in the town who don't enjoy a royal warrant, the Island Sailing Club, Cowes Corinthians SC and East Cowes SC. 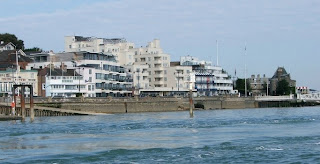 Just upriver is the old town part of West Cowes, below is The Prospect, former home of Sir Max Aitken, yachtsman, fighter pilot and newspaper magnet. The building now houses the Sir Max Aitken Museum.
Anyone who has sailed in and out of Cowes will be aware of the strong tides, in these two pictures you can see there's a strong ebb tide running. 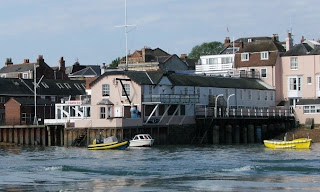 Just upriver and past the ferry terminal in East Cowes is the chain ferry which is the main link between the two parts of town. The river starts to narrow here and well - can get rather crowed especially on holiday weekends! 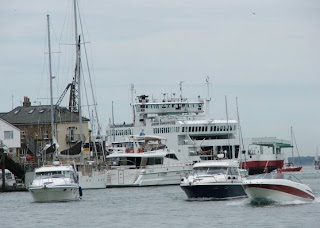 Moving upriver the scene becomes much more industrial, reflecting the tradition of yacht and ship building in the town. This picture (below) for me sums up Cowes a modern work boat is on the slip, ashore next to it are two America's Cup racing yachts while in the foreground is a Harrison Butler designed classic. 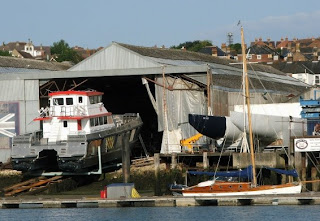 The weekend weather was as promised, sunny and settled, perfect for just watching the world going by. This was our last view of Cowes looking west toward Egypt point, as we set sail on Sunday morning.