We were walking the coastal path to Durlaston Head on Saturday when we saw the Swanage lifeboat heading out in earnest. It was a breezy afternoon with plenty of white caps around as they headed out. 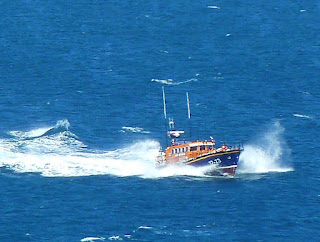 About an hour later we saw them returning with a yacht in tow. 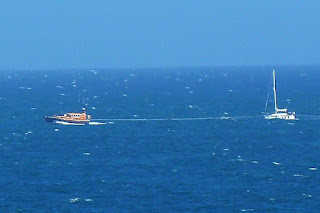 From their web site a 29' yacht 'Maglar' out of Eastbourne had suffered rudder failure and was left drifting helplessly after dropping her sails. In a little over 30 minutes later the lifeboat was alongside Maglar and transferred 2 crew to her to arrange a tow.

Initially a tow was attempted without any steering correction, but very soon it was decided to employ a drogue to hold the tow steady. As the damage to the rudder was not simple and would need expert help, Maglar was towed towards Poole harbour, where the tow was taken over by the Poole all weather lifeboat and the volunteer Swanage crew transferred back aboard the Swanage Lifeboat.

Thanks to the volunteer crew who make our local waters a safer place.
Posted by Bursledon Blogger at 06:00