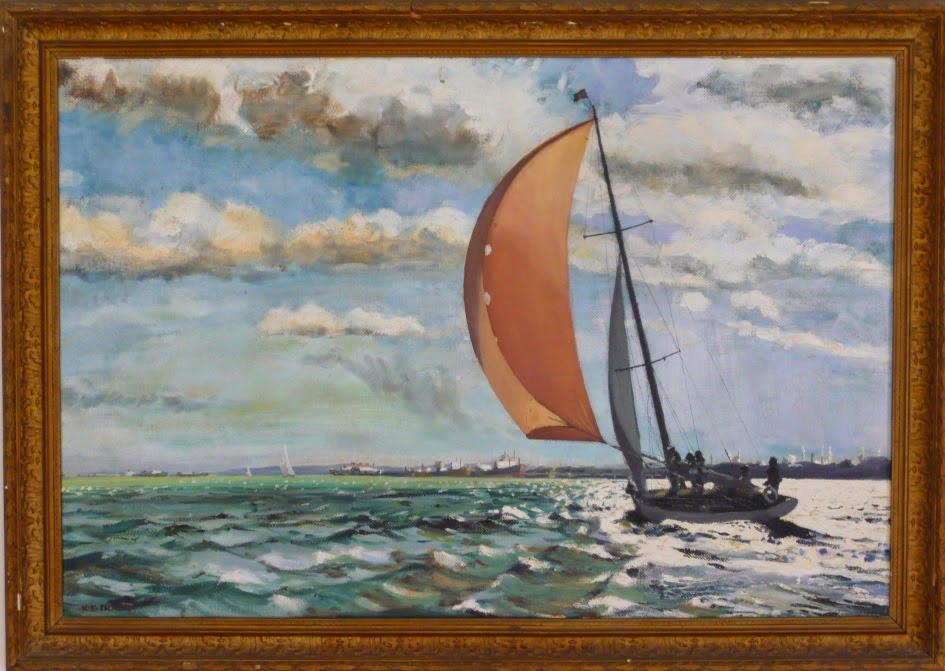 In Patrick's own words,

"I have sat and looked at this painting hundreds of times, trying to figure out exactly what is going on in it.
Is it evening or morning?
Is that the Queen Mary approaching Calshot and about to turn into Southampton Water?
What are the crew of the yacht doing?
Are they stowing the main or getting ready to hoist it?
Why are they under spinnaker alone.
Is that a Commadore’s burgee at the masthead or a racing flag?
If they were racing but have now stopped, where was the finish line?
Why didn’t they drop the spinnaker there?
Have they just come out of the Hamble or are they further up Southampton Water – perhaps off Netley?

Maybe they are trying out a new spinnaker. It looks like the Herbulot pattern that was briefly popular in the late 50s or early 60s. I think this design with the holes in it was then banned by the RORC so that dates the scene, as does the absence of the Coastguard tower at Calshot."

Although I haven't had the chance to sail over there recently I agree that the location appears to be Southampton water near Netley. If so the sun seems to be in the south west or west which puts the time as late afternoon or evening.

As to the other questions we welcome imaginative or factual replies from BB readership.
Posted by Bursledon Blogger at 02:30