Back in March I wrote a tongue in cheek post about a senior Laser sailer only to get an equally tongue in cheek email a couple of days later from the man himself .
It turns out that David not only sails but has been a keen rower for many years, seen here in the Cosine Wherry which he built some 16 years ago from plans published in a book called Rip,Strip & Row. 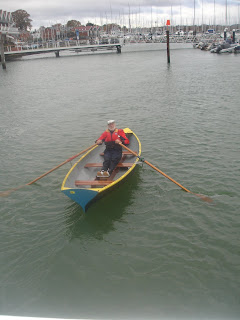 Apparently Laser sailing and other things got in the way of rowing for a few years, but last year David started rowing in earnest often from Hamble up to the Horse and Jockey pub at Botley. Actually I'm surprised we haven't seen each other on the river, but maybe that's because rowers face backwards! 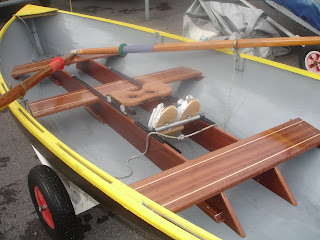 Over winter David took his Wherry along to local boat builders Casse Tete Marine who did some remedial work and installed these immaculate thwarts.
David signs his email the "Old Bearded Laser Man" - I thought about calling the post the "Saga Sailer Saga!"
Look forward to seeing you on the water David if I every get round to doing some rowing this spring!!
Posted by Bursledon Blogger at 01:40