The first time we spotted this fantastic orange boat was in Sete, South of France in 2006. She was in the marina along by the sea wall, which made it difficult to get very close and photograph very well.

I was fascinated by the design which has taken many ideas and features from current racing yachts to create a modern and obviously fast cruising boat. 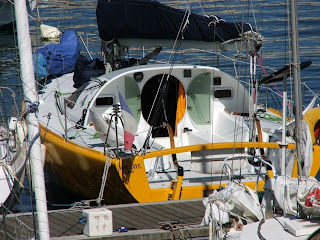 A couple of days later we saw her again in the port of Meze on the Etang ge Thau.
The owners were not on board, and in any case my French isn't that good so we were unable to find out anything about the design or who built her.

Having seen her close up I was even more taken with the design, I especially liked the deck saloon which extended back to provide a shelter for crew in the cockpit. 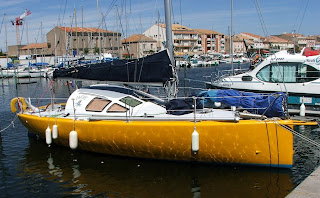 With twin rudders, steering these wide stern boats can be a problem, especially when heeled, these swivel seats on the stern quarters should provide a comfortable place for the helm or watch keeper. 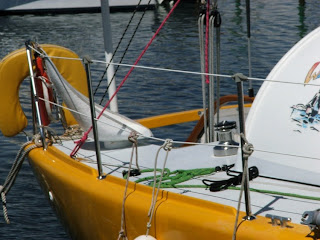 About eighteen months later at the end of 2008, we were having lunch at the quay at Port Olympic in Barcelona, when the same orange boat sailed in. The marina is enormous and has security gates to prevent access, so we were unable to go and speak to the owner, and no closer to finding out any more about the boat. 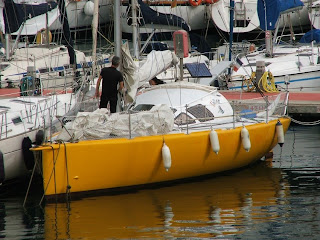 Then a couple of weeks ago, Robert Wise posted "Sweet Ride" on his Boat Bits blog, featuring the same orange boat, from the look of the photo's I'm guessing she is somewhere in the Caribbean. Bob kindly replied to my email asking for details, the boat is a Turbo 950, designed by Jean-PierreVillenave who mainly does plywood designs in France (He's also written a couple of boat building books on plywood).
So the mystery is solved, according to my translation the description is of a fast cruiser, built on a moderate budget, there is also a bigger 11 meter version, and for the minimalists there's a Turbo 6.5m