Walking back to Earls Court tube recently I spotted this fantastic hearse parked beside a pub. I went over to ask permission of the funeral director to take a photo. He was more than helpful telling me about the history of the vehicle. 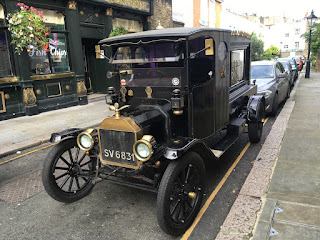 It's a 1906 Ford model T, originally supplied as a truck bed with a crane apparatus for picking up heavy gravestones. It was shortly after converted to a hearse as seen now and has been in use ever since.

It's owned by J F Shackleton and Son's established 1703 and England's oldest firm of funeral directors who also have other Model T hearses in their fleet,

On the day it was used for delivering poppy badges to local pubs where they are sold to raise money for veterans and Remembrance Day  11th November  - a heartfelt thank you to Shackleton  & Sons. 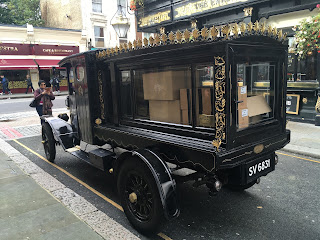