Sorting out some old books and papers I found this pristine program from the 1983 Le Mans 24 hour race. 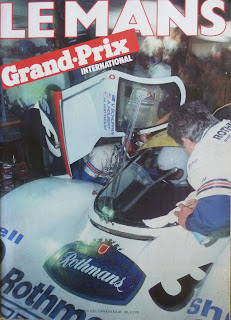 We'd driven down with a bunch of college friends, crossing the channel from Portsmouth to Cherbourg and then a wild night time drive through the French countryside and towns on the old  roads as there were no direct motorways or at least we failed to find them.

About five friends had piled into tricky Nicky's old Mk 7 Jaguar, my friend Malcolm had a Sunbeam Tiger with a 4 litre V8, I struggled to keep up  with them in an old MG Midget.

On the way back the clutch operating arm snapped and we drove all the way back double de-clutching, my friend Mark would push to get the car rolling enough so I could get into first and then he'd jump in. The long straight roads in France were easy and we seemed to avoid getting stuck in traffic or too many traffic lights. Somehow we even made it onto the ferry like that, I can't imagine that would be allowed these days. 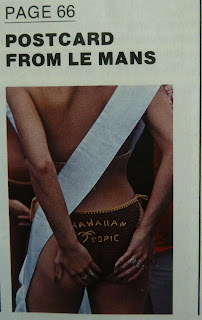 One of the most memorable aspects apart from the Hawaiian Tropic girls, were Mazda, the first Japanese manufacturer to enter the race with their quirky 717C rotary engine cars which first time out finished 12th and 18th against the mass of Porsche entries. 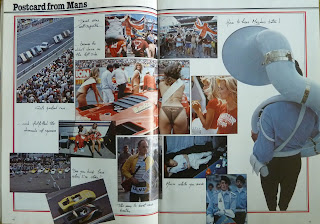