The Hamble Star is a local pre war dinghy long since vanished from these parts but kept alive at Erith YC on the south  shore of the Thames estuary. 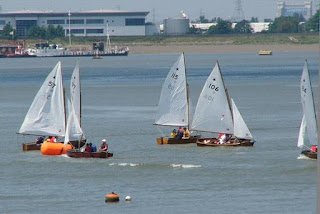 In a surprise turn of events a local resident appears to have purchased 8 Hamble Stars which will be returning to their home waters in time for Bursledon Regatta.

Created at Hamble in 1925 the Hamble Star one-design dinghy was the boat to race until Merlin Rockets and National 12's took over in the 1960's. Now the Hamble Stars are returning home after many years at Erith Yacht Club on the River Thames, this time to create a new fleet of eight boats at Old Bursledon.

Timing was crucial to this happening at all as Mike Blackman, a keen boater and Old Bursledon waterfront resident explains: "I had been planning to start a new fleet of two-man dinghies, possibly Enterprises, for racing in the River Hamble but that changed when I met Jonty Sherwill on the ferry to Cowes in early June and who told me about the Stars being for sale". Hamble River Sailing Club is where the Stars were originally based and Jonty, a former Commodore, had been tipped off by an old sailing friend David Munge (who learn't to sail in the Stars at Erith) that the club's beloved old boats were to be sold off just a week later. The deal fell into place on the morning of the sale when Mike phoned David with an offer to buy eight boats, sight unseen.

While members and visitors at Erith Yacht Club celebrated this most acceptable arrangement on that Sunday morning it also means that the memory of Michael Robinson will be rekindled on the River Hamble. He was the Hamble born man, brother of the legendary HRSC Commodore Nic Robinson, who arrived at Erith in 1945 with his own Hamble Star. Michael then built up the fleet with more Stars from Hamble, helping to teach countless children to sail in these safe and responsive dinghies.

With a new trophy for an annual team challenge already being discussed (six boats are remaining at Erith) look out for the Hamble Stars when they race again at this year's Bursledon Regatta.
Posted by Bursledon Blogger at 07:00